Chowder Fan Club
Register
Don't have an account?
Sign In
Advertisement
in: A to Z, Characters, Main characters,
and 8 more

Chowder is the main protagonist of the series of the same name. He is an apprentice under the learning of Mung Daal. In several episodes, there is a gag that Chowder is fully aware he is in a cartoon (commonly called "breaking the fourth wall"). However, this does not seem to bother him, except for the episode "Brain Grub".

Chowder is a cat-bear-rabbit like Panini, but he has a feline appearance in contrast to Panini's lagomorphic appearance.

Chowder has lavender fur, a small pink nose, a striped racoon-like tail and short bear-like or Netherland dwarf rabbit ears that are usually covered by his purple hat.

He generally wears a purple hat with two points and a purple long sleeve shirt with fuschia/magenta trim that covers his legs. He also wears purple Mary Jane shoes and rarely wears pants. He has a prominent fang on his upper jaw that can be seen even when his mouth is closed. Due to his appetite, he's quite heavy and doesn't do well with sports or physical activity in general.

Chowder has the personality of a sweet, innocent, impulsive and friendly child who has a passion for being in the kitchen. An aspect of this side of his personality is that he's highly sensitive and emotional, and has been shown to cry more than once, mostly due to perceiving his mentor, Mung, of not listening to him or trusting him. He's even cried over receiving punishment, which is understandable for his age.

There have been times when he has a much darker side to his personality when it comes to his passion towards becoming a chef, such as in the episode "Chowder's Catering Company" when he was willing to render Schnitzel, Mung Daal, and Truffles unconscious with a frying pan and stuff them into a single pickle barrel for the sake of keeping his catering business for Kevin and the rest of his species; however, he disbanded the aforementioned business in favor of saving his friends from certain death and relinquishing fulfillment of his dreams.

Chowder has been known to go berserk if he doesn't have food within a limited amount of time and has been shown to eat anything on impulse, regardless of any etiquette that he might be required to observe and he's even done things on impulse, such as snatching the large container of Pizzazz and inserting the entire container into a dish, resulting in bodies being switched. He is very loyal to Mung and has called him "papa", showing he thinks of him as a daddy, and like the others, is usually scared of Truffles and pretty much girls in general.

Chowder's ability to form bonds or relationships with other characters is often strained due to him being a nuisance to others.

Chowder has clearly taken a big liking towards Mung, often seeing him as a father and going to him for advice, Mung even at times treats him as if he were his own son. As Mung's apprentice, Chowder tries his best to oblige to Mung's wishes, but will often disobey if he feels the need to do so. His enthusiasm makes up for his intelligence, which seems to amuse Mung at times. He and Daal are often seen preparing dishes together, even though Mung knows of his erratic and uncontrollable behavior.

Gazpacho has taken a liking to Chowder, even referring to him as "his little buddy" at one point, they are shown to be close friends, as they often go to one another for help or assistance in their daily lives. Chowder was the one who helped Gazpacho pursue his Comedy career, and Gazpacho tried to help Chowder with his problems with Panini (to an extent). Gazpacho was also chosen by Mung and Truffles to Chowder's babysit Chowder. 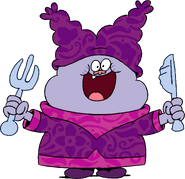 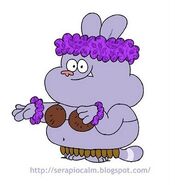 Chowder's pattern of his clothes.

Chowder's other pattern of his clothes. 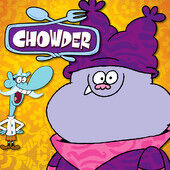 schnitzel and chowder dressed as a mariachi duo 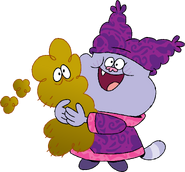 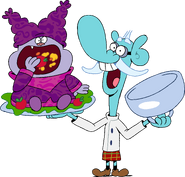 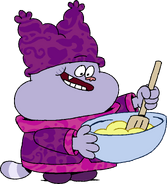 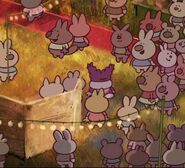