Gorgonzola is a character in Chowder. He is a rat-like candle holder, who is Chowder's age, and he serves as a nemesis figure to Chowder. Gorgonzola holds a strong dislike for Chowder, but this has lessened since the Apprentice Games. He plays Sniffleball as the Zinger. His mentor and master is another candle holder named Stilton.

Gorgonzola is a green rat-like creature who has a blue-green wax candle on the top of his head, which is always lit. His ears stick out on either side of the candle. He has a long snout which curves upwards, a large, round, black nose, and two yellow buck teeth. Often, his eyes are drawn with bags under them. Gorgonzola's outfit is a large brown long-sleeve shirt, patterned with patches, and he doesn't wear any shoes. He has a long, curvy tail with three stripes on it. It's uncertain whether these stripes are a pattern or if they're bandages.

Gorgonzola is surly, and rather egocentric. This causes conflicts between him and Chowder, due to the latter's good nature. He also has a tendency to antagonize Chowder when things aren't going his way. It seems that he feels bored or unfulfilled within his own life, and instead believes that Chowder and Panini get all the fun. He dislikes Chowder quite a bit, but seems to have softened his opinion since "The Apprentice Games". 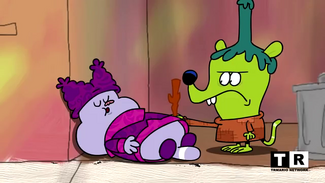 He nags on or teases Chowder for his weight. He's claimed Chowder weights "700 pounds". This is mildly ironic, seeing as Gorgonzola isn't so skinny himself (though he's not as large as Chowder). Gorgonzola has also hypnotized Chowder several times, using food, such as Master Lollipop, Master Cinnamon Swirl, Master Pizza, and Master "Ummm" (who is just Gorgonzola's hand). Chowder treats Gorgonzola kindly and appears oblivious to the fact that Gorgonzola likes him as a friend. He's referred to Gorgonzola as his "best friend" before (though that statement was disagreed upon a moment later). Despite this, there are a few occasions in which Chowder expresses that he's scared by Gorgonzola's presence (often because in these instances, Gorgonzola is threatening Chowder). It is said by Greenblatt that Gorgonzola is actually jealous of Chowder because Chowder is the apprentice of a famous chef, while he's only a mere candle holder. Gorgonzola's opinion towards Chowder changed for the better in the episode "The Apprentice Games", after Chowder saved his life. Succeeding this episode, Gorgonzola treats Chowder more gently. He starts insulting him less, and even goes so far as to help Chowder (like in "The Blackout" or "Hey, Hey, It's Knishmas").

In "Chowder Grows Up" it's revealed that Gorgonzola grows up to become the CEO of Candle Corp Industries, but in Gorgonzola's eyes, it's a hollow victory, as Chowder never grew up and therefore Gorgonzola can't brag about the success to him. He even admits he needs Chowder to be his rival. When Chowder does grow up, it gives Gorgonzola the peer he needs; however, due to Chowder's nature, he's happy for Gorgonzola rather than jealous, but deep down. This causes Gorgonzola to experience another hollow victory, and drives him crazy.{{