Panini is a cute young girl and is also one of the main characters in the series. She is an apprentice of Endive. She has a huge crush on Chowder and tries to get closer to him despite him not wanting to become more than friends.

Panini is a pink-furred cat-bear-rabbit. She usually has her ears tied like pigtails or a ponytail and has rose colored eyes. Her regular outfit is a sleeveless yellow dress with light green polka-dots and a light green heart in the middle of the dress. She has green shoes and a light green polka-dotted yellow hair band that she uses to tie her ears. Her appearance changes when she is angry to an extreme degree. During this time while she is in her "anger form", she resembles a cat more than a rabbit. She has black fur, her irises and nose are fuschia, and her sclera is green. Also during this time, her outfit resembles Chowder's.

Also stated by the creator in a blog post, she was going to be named Borlotti, have pointy ears and wear something with her face being the only thing not covered. Instead of being in love with Chowder, she would be a bully to him. C.H. Greenblatt described them like Tommy and Angelica Pickles from Rugrats.

However, the creator dropped the pointy ears idea as he felt it didn't fit with the drawing styles of Chowder, and he wasn't fond with that behavior as he thought he needed to make her more "sweeter and cuter". He then thought of a concept of Panini being in love with Chowder, since Chowder is not old enough to fall in love with females, according to Greenblatt, this aspect would frustrate Chowder "in a more fun way".

Panini is very loyal and obedient to Ms. Endive like a Shiba inu or a soulless robot who can't think independently for herself with no free will and often gets punished by her whenever she fails her, according to "The Apprentice Games". Panini always follows and obeys Ms. Endive's demands without question like a mindless drone without a soul or a will of her own, even if it means hurting Chowder.

Panini is also a good Sniffleball player. In one episode, Panini thought that she and Chowder had a Bluenana Baby. Panini also has a dark side, like when she violently forced Chowder to hold her hand and when she almost beat Gazpacho into a pulp though otherwise she is a happy and kind girl who hardly ever gets angry. She sometimes seems to dislike Gorgonzola due to his constant bullying of Chowder.

Flanini trying to give Chowder warmth in The Brain Freeze 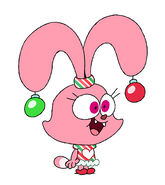 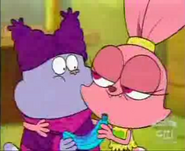 Panini in her fancy and seductive outfit 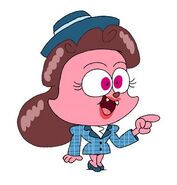 Panini in a deleted scene of the episode Panini for President.

A Grown up Panini

Her original concept art as Borlotti.

Panini and Chowder- The Dinner Theater

Let him kill you and use you as bait

Um chowder is that you? 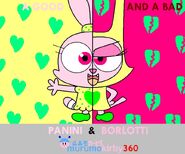 Is that ren or panini

Chowder how could you

Puppet panini that appears in credits...

...and on display at Puppet Design Studio.