Chowder is just one step away from mastering a very complicated dish and becoming a chef. Can he do it?

The episode begins with Chowder receiving two bags from Gazpacho, and running home with through Marzipan City. them. Within a few minutes, he starts to get tired, then sees a piston salesman. He uses a piston as a spring and bounces back to Mung Daal’s Catering. Meanwhile, Truffles is taking an order for a customer and gets frustrated when she finds out they don’t know how to spell the name of the dish. She calls for Mung to get the order, but he tells her to bring it to her. Chowder crashes through the roof just at that time, so Truffles gives the order to him.

Chowder brings in the bags and the order. Mung notices the grocery bags are rather small and Chowder admits to snacking "a little" on the way home and proceeds to regurgitate mounds of food and a marching band. Mung announces that the order is for a "Froggy Apple Crumple Thumpkin" and, against Shnitzel's wishes, has Chowder assist him. As it has been a few centuries since Mung has made this advanced dish, he decides to consult the Really Really Really Big Book of Recipes; a cookbook about two stories tall, before beginning.

In the first step, Mung introduces Chowder to an ingredient known as the No-fruit. On tasting it, Chowder complains that it has no flavor. Mung shows that pulling the fruit's leaves causes it to start cycling through several kinds of fruit. Tapping it at just the right time, Mung causes it to change into an extremely flavorful apple. Mung, Schnitzel and Chowder start tapping several no-fruits, though one fruit tapped by Chowder turns into a hideous little monster that latches onto Schnitzel's face. After a brief struggle, Schnitzel manages to pull it off, and it tumbles into a corner of the kitchen. "I think that's enough apples," Mung concludes step 1.

During the second step, Mung says that they have to prepare the meat, which is a twelve-legged cave frog. He gives it to Chowder to put into the chipper-chopper. Chowder pours it in right before Mung says that they should remove the explosive sting sack first or the whole thing would be ruined. Chowder gets nervous and starts pressing buttons on the chipper chopper, and the dish seems to come out okay, until the stink sack comes out also. He tastes the stink sack, but it releases fumes and starts beeping. Chowder throws it behind him when Mung comes over, it sticks to Shnitzel's back and explodes causing Mung to remark on Schnitzel's diet.

During the eighth step, Chowder throws a barrel down a slide and Shnitzel stabs a giant pin through it from a trapeze, releasing a spray of wine into a giant pot that Mung stirs. In step twenty-three, Chowder tries to reach for a high cupboard and Shnitzel helps him; however, the monster is in there, and it clings onto Shnitzel’s face again. In step forty-six, Shnitzel jumps up and down on a bellows to get a stoke up the fire in the stove. In step fifty-two, they all drink juice boxes, and Mung starts choking on his.

On the sixty-eighth and final step, they must beat the dish at thumb wrestling. The customer comes for the dish and Truffles asked Mung if it is ready. Mung struggles against the dish and tags in Chowder. At first, Chowder panics and runs away with the dish chasing around the kitchen until Mung reminds Chowder that before a chef serves a dish he must always taste it. Chowder turns and bites the dish, beating it. However, Chowder gets carried away and tries to devour the whole thing. Luckily, the dish flees into the hands of the customer and as he runs away with it while Mung does his best to hold Chowder back. Mung observes that the whole thing went well and Truffles agrees.

Chowder then eats the background and leaves.

Breaking Down the Fourth Wall

Add a photo to this gallery 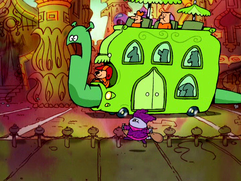 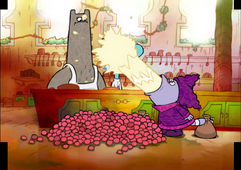 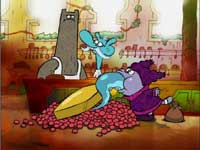 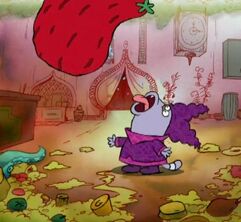 Chowder spits out a "little bit" of food. 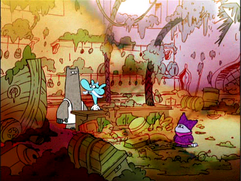 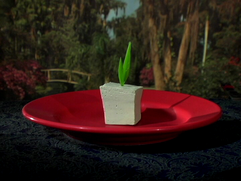 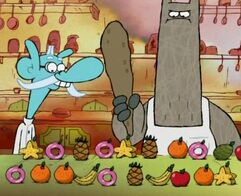 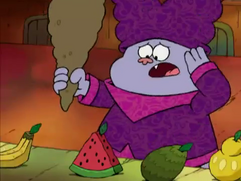 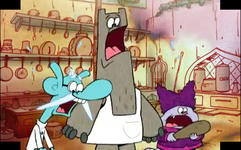 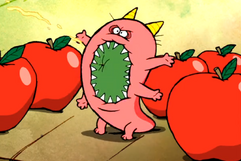 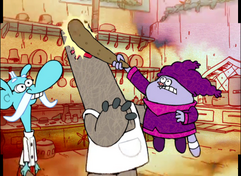 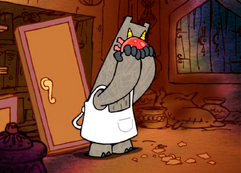 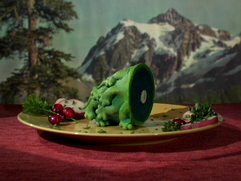 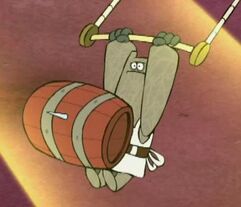 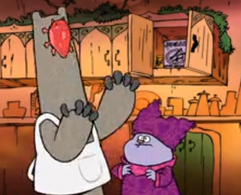 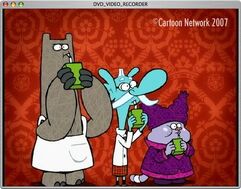 Add a photo to this gallery

Retrieved from "https://chowder.fandom.com/wiki/The_Froggy_Apple_Crumple_Thumpkin?oldid=36082"
Community content is available under CC-BY-SA unless otherwise noted.